Monosodium glutamate (MSG), a common food additive (e-number E621), is used to enhance the savory, meaty umami flavor of foods. Even though it is widely used in Chinese cuisine, there isn’t anything inherently Chinese, or even Asian about MSG. It is one of the most abundant amino acids available in nature.

MSG is umami in its purest form. Umami, one of the five basic tastes that our tongues experience, is igniting interest in the ingredient and culinary world. Food product developers have called MSG a ‘back pocket ingredient’ because it supplies the missing link in many formulations or recipes. Studies report that we have umami-specific receptors on our tongues and in our stomachs, which drive our love for foods that contain glutamates, such as tomatoes, mushrooms, and aged cheeses. Moreover, human milk is naturally rich in glutamate; therefore, even babies seem to like MSG. 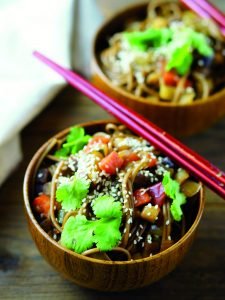 The history of umami flavor goes back to 1908, when Dr Kikunae Ikeda, a Japanese chemist first discovered that the base made from kombu seaweed in his soup imparted a different but delicious flavor. However, it was not one of the four previously established tastes in humans –sweet, salty, sour, and bitter. Ikeda named it ‘umami’ and proceeded to invent a method for producing seasoning with glutamate as a critical component. He soon isolated the crystalline salt of glutamate from kelp and named the crystals’ Ajinomoto – essence of taste.’

Soon after its discovery, MSG became a branded staple for any modern cooking and quickly became ubiquitous in kitchens across Japan and China. By the early 1930s, companies like Heinz and Campbell’s added MSG to their products like sauces and made it global.

MSG is associated with negative connotations and is perceived to cause severe side effects as well as the ‘Chinese Restaurant Syndrome.’ The Merriam-Webster dictionary defined CSR in 1968 as, “A group of symptoms (such as numbness of the neck, arms, and back with headache, dizziness, and palpitations) that is held to affect susceptible persons eating food and especially Chinese food heavily seasoned with monosodium glutamate.”

It all started in 1968, with a letter to the editor of the New England Journal of Medicine describing the author’s and his friends’ so-called Chinese Restaurant Syndrome following the consumption of Chinese food that included symptoms like heart palpitations, generalized weakness, and radiating numbness. Later the letter was found to be a hoax, but the myth persisted.

This issue came to the fore once again, two years ago, when MSG was found in packets of Nestles’ Maggi noodles that claimed that there was ‘No added MSG.’

The issue of MSG is agitating the worldwide market with the result that the Japanese company Ajinomoto is now running a campaign to recover the image of MSG, asserting that it is safe for consumption. In addition, it has requested Merriam-Webster to remove the entry entitled Chinese Restaurant Syndrome as the company feels the dictionary entry is both ‘racist’ and ‘unscientific.’

The science behind MSG

Glutamic acid functions as an excitatory neurotransmitter in vertebrates. It helps nerve cells to send signals to other cells in the body. Therefore, some people believe that the consumption of MSG leads to excessive glutamic acid activity in the brain and stimulation of nerve cells. This belief has led to the labeling of MSG as an excitotoxin. Some experimental studies conducted on animals seemingly confirmed the idea of MSG being excitotoxin. However, these studies often consisted of injecting large doses of MSG into newborn mice, which caused harmful neurological effects. It was not exactly a scientific approach to determining the impact of MSG sprinkled into saucepans.

Science proves that increased glutamate activity in one’s brain can cause harm. It has also been reported that large doses of MSG can raise blood levels of glutamate. However, a research paper authored by Richard A Hawkins in The American Journal of Clinical Nutrition says that dietary glutamate should have little to no effect on your brain, as it cannot cross the blood-brain barrier in large amounts. To date, there is no compelling evidence that MSG acts as an excitotoxin when consumed in reasonable quantities.

The Food Safety and Standards Authority of India (FSSAI) also clearly states the monosodium glutamate may be added to food as per its Good Manufacturing Practices (GMP) level with a proper label declaration. However, FSSAI also mentions that MSG shall not be added to any food for use by infants below twelve months. Currently, FSSAI has guidelines for maximum permissible limits of MSG to be added to canned crab meat (500 mg in one kilogram) only. However, there are no specific guidelines for the maximum limit of naturally occurring MSG in food.

Moreover, the US-based FDA also considers the addition of MSG to foods to be generally recognized as safe (GRAS). Over the years, FDA has received many reports on adverse effects and asked scientific organizations to examine the safety of MSG, which concluded that MSG is safe. “The reports had identified some short-term, transient, and generally mild symptoms that may occur in some sensitive individuals who consume 3 grams or more of MSG without food. However, a typical serving of a food with added MSG contains less than 0.5 grams of MSG. Consuming more than 3 grams of MSG without food at one time is unlikely,” FDA states.

MSG doesn’t deserve a toxic reputation until we find a valid scientific proof. Therefore, there is no need to avoid your favorite restaurant just because they use a little MSG in your meal. Research reports indicate that MSG is safe in moderate amounts. However, large doses may cause harm, which is true in almost everything we consume. The truth lies somewhere in the middle. Having said that, if you don’t experience any side effects, there’s no compelling reason to avoid MSG!