Ashwagandha is known for its variety of therapeutic activities and is one of the effective stress busters among Ayurveda Herbs, which ultimately boosts inner strength and immunity. It increases vitality, combined with various anti-viral effects.

The sterilized Homogenized flavored Toned Milk has a shelf life of 90 days and needs no refrigeration till it is opened. It can be consumed warm or chilled as preferred. For better effect, drinking warm milk is advisable with a microwave of up to 30 seconds.

According to the company, Heritage Ashwagandha Milk is free from artificial preservatives. It will be available at leading modern retail stores, eCommerce platforms, select standalone stores, Heritage Parlors, and on Heritage TUCH App in an attractive170ml PP bottle priced at Rs 30 a bottle.

Brahmani Nara, executive director, said, “We are excited to launch Ashwagandha Milk, which is an ancient ayurvedic recipe, which is set to boost overall wellbeing of our consumers. Ashwagandha is the king of Ayurveda herbs. I am confident that Ashwagandha with goodness of Heritage Milk would entice our consumers.”

“We look forward to offering consumers some thoughtfully crafted gift packs and hope to revitalize the spirit of festivity and address consumers’ requirements during these times. By making ghee available in small sachets, we aim to reach every Indian household this festive season. Small sachets have been very effective in driving consumption and target small families looking at one-time use for festive and other cooking purposes. Consumers across the country who would like to enjoy the quality product but do not want to buy big sachets are discovering the convenience offered by small sachet packs.”

Heritage Foods, founded in the year 1992, is one of the fastest-growing Private Sector Enterprises in India, with two business divisions — Dairy and Renewable Energy under its flagship Company Heritage Foods and Cattle feed business through its subsidiary, Heritage Nutrivet (HNL). 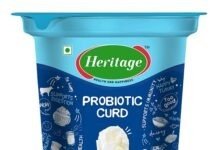