Andía Lácteos de Cantabria is a part of the Iparlat Group, which initially was created from the Spanish union of dairy farmer cooperatives. The company mainly package liquid dairy products sold under a well-known Spanish retailer brand. The same retailer gave the initial impulse to move from the carton and HDPE bottles towards bottling milk in PET. On their Sidel Aseptic Combi Predis – now in operation – extended shelf-life milk (ESL), UHT milk, and milkshakes are bottled in three formats (0.25 L, 1 L, and 1.5 L), allowing the dairy player to broaden their spectrum of SKUs.

According to the press release, Sidel Aseptic Combi Predis, with its dry preform and cap sterilization technology, was integrated into an existing bottling line for HDPE bottles, providing simple, cost-effective as well as sustainable and flexible production.

The line is currently running at 9,000 bottles per hour, with 97% efficiency. With this new packaging line, several million bottles were produced by Andía Lácteos in 2019. “We succeeded in increasing our portfolio by producing new UHT milk recipes we could not produce before, for instance, the lactose-free milk, for which the demand in the market is growing every day. With this state-of-the-art aseptic PET bottling line, we will be able to significantly strengthen our brand image in the Spanish market,” explains Villafranca.

The milk PET bottles, according to Sidel, have proven to be highly successful. With sales soaring, Andía Lácteos de Cantabria has recently decided to invest in another Sidel Aseptic Combi Predis, combined with the conveying and accumulation solution Gebo AQFlex, to increase their production capacity even more. 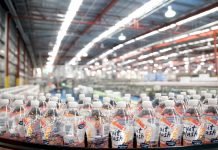